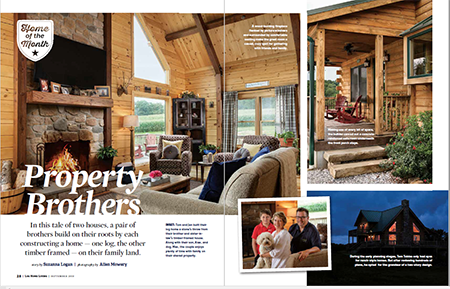 Property Brothers: Log Home Living magazine featured this gorgeous Timberhaven log home (a modified Aspen Hill I).  Click below to be the first to check it out!

“You can’t go back home to your family, back home to your childhood …” wrote famed novelist Thomas Wolfe, “… back home to places in the country … back home to the escapes of Time and Memory.” Pulling a bass out of the same pond they fished as kids and roaming the 50-acre property that surrounds it, Tom and Scott Tobias have a different take on returning to your roots.

Both brothers remember spending lazy days on the rural property, which belonged to their grandparents and was located just 15 miles from where they grew up. It was their family’s go-to spot for summers and long weekends. It was also a place where trees touched the never-ending sky; pond water seemed clear and inviting; and foxes, raccoons, deer — and most of all — young boys, roamed freely.

Today, the sky still feels impossibly big, wildlife flourishes and the brothers’ four boys (Tom and his wife, Jen, have one; Scott and his wife, Liz, three) still get lost in the same imagination games that turn streams into raging rivers and tree forts into castles.

The only difference is that instead of the family land serving mainly as a summer escape for book-weary boys and family reunions, it’s a perpetual haven, allowing the brothers and their families to continue their close-to-the-land traditions all year round.

The property’s new beginnings as a brotherly homestead began in 2013 when their parents, who had been given the land from their grandfather, divided it into three parts, gifting one piece to each of the brothers and their sister. It didn’t take long before the men began envisioning how they could return to their roots.

For Tom and Jen, building a log home on their 11-acre property was the answer. “We had never really talked about it, but turns out, we both had this secret desire to have a log home,” says Jen. The couple leaned towards logs for their ability to meld the home’s exterior seamlessly into the landscape and for the freedom from drywall they offered. “In every other home I’ve lived in, I’ve woken up to a white ceiling,” says Tom. “Now, I open my eyes and see stained beams. It’s very calming and rustic.”

That same feeling flows throughout the three-bedroom, two-and-a-half bath home made of 6-by-8-inch eastern white pine logs, cut into a D-shaped profile with mortise-and-tenon corners. The couple opted for a Timberhaven Log & Timber Homes floor plan, the “Aspen Hill,” and made a few modifications, such as turning one of the upstairs bedrooms into a second master suite and expanding the decks to take advantage of the pond views.

Above all, it was those views of the pond that drove the design of the house. The couple positioned the A-frame, with its expansive windows, towards the water to allow for the best views. “Having the perfect view of the pond from the great room window was the most important thing to us. I would sit on top of my 4Runner for hours trying to picture the view from the great room windows,” Tom says. “The day before we were going to pour the foundation, I called the builder and had him move the footprint 30 feet to the right. That made it perfect.”

Fittingly, capturing the pond views are what sold Scott on his home, too. After escaping the hustle of the Washington, D.C., suburbs to embrace a more laid-back lifestyle in Maryland, Scott and Liz began researching building options for their 13-acre portion of land. (They were about six months behind Tom and Jen’s build.) “None of the stick-framed house plans we looked at had the big great room with the windows that we were anticipating having,” explains Jen. “Then, lo and behold, we go to a home show, and there is this timber-framed home overlooking a pond just like ours. We were sold. We said, ‘This is the home we want to build.’ And that was it.”

In addition to its stunning good looks, Scott and Liz were also sold on the flexibility of a timber frame. They wanted the look of a traditional house with a back-to-nature flair and found a timber hybrid fit the bill. “It’s a structural timber frame made of eastern white pine with mortise-and-tenon joinery,” says Todd Fisher, the Timberhaven sales representative (and owner of Todd Fisher Construction) who, along with his daughter, Nicki Young, spearheaded the sale of both brothers’ homes. “They used pine on the ceilings and drywall on the walls.” Scott adds: “We opted for drywall instead of tongue-and-groove to keep it modern, but the timber frame still gives off a rustic feel.”

The couple found a floor plan they loved online and hunted down the architect who created the plans. After a few custom touches — such as tweaking the layout of the master suite and adding a mudroom and a garage — the couple locked onto the same builder Tom and Jen were using, David Starr, and moved forward with their four bedroom, two-and-a-half bath home. The families moved in just three months apart.

In addition to the homes’ similarities of timing, proximity and big-timber construction, the structures each feature open plans, large picture windows; cathedral ceilings; masters on the main; and a strong use of natural materials.

But, of course, there are differences: size for starters. “Tom jokes that our garage has a larger footprint than his whole house,” says Scott. Tom’s log home rings in at 1,900 square feet, plus basement, while Scott and Liz have 3,400 square feet of finished space, with an unfinished basement and in-law suite. And, where Tom and Jen’s cabin is classic, warm and cozy, Liz and Scott’s timber home has a contemporary vibe with clean lines and finishes.

Getting back to the similarities: Both homes exude a wide-open sense of welcome. “We have a lot of cookouts around the pool for family and our son’s baseball team,” says Jen. Liz adds: “When my house is filled with people that I care about, it’s exactly what I had pictured. It’s my favorite thing about the house.”

While the brothers, too, love sharing their homes with others, the personal nostalgia of returning to their roots is what seems to matter most. “Living here, watching the boys playing in the stream and taking them fishing, definitely takes me back to my childhood,” says Scott. Tom adds: “I think about the significance of living here every day … I’ve come full circle.” 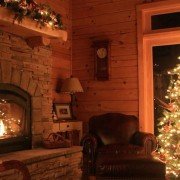 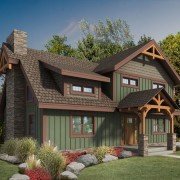 The Retreat That Love Built: A Feature in Cabin Living Magazine 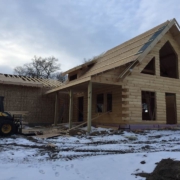 Suggestions for Building a Log Home in the Winter – Part 4 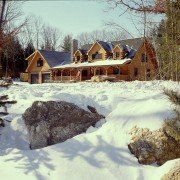 Feature Home of the Month: The Liberty Log Home 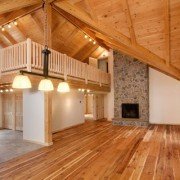 Lighting: Bright Ideas for Your New Log or Timber Home

Get A Free Copy Of Our Brochure!

You can now get a copy of our award-winning, 16-page log home brochure which includes an introduction to Timberhaven Log Homes, our products, package offerings and services. Stunning full-color photography, a sampling of design considerations, and a log home planning checklist are also components of the brochure.

To request a copy of the brochure by regular mail please go to this page.

To get a link to download the pdf version of our brochure go to this page.